Nickelodeon’s “Good Burger 2” movie is officially in the works, and Kel Mitchell says the sequel film will leave fans of the original “screaming” when they see the star-studded cast. After posting teasers for months, Mitchell officially confirmed that he’s reuniting onscreen with Kenan Thompson to bring back Ed and Dexter, Good Burger’s iconic fast-food duo, 25 years after their debut.

Speaking with POPSUGAR about his recent partnership with Beyond Meat and Panda Express, Mitchell reflected on his days as a ’90s Nickelodeon star, what it’s been like working with Thompson again, and what to expect from the upcoming “Good Burger” sequel.

Mitchell secured his breakout role as a main cast member on Nickelodeon’s sketch-comedy show, “All That,” in 1994, when he was 16 years old. For five seasons, he entertained audiences as Coach Kreeton, Clavis of the duo Mavis and Clavis with Kenan Thompson, and Ed, a goofy fast-food worker with a surfer dude accent. For Mitchell, the novelty of seeing fans smile whenever he says, “Welcome to Good Burger, home of the Good Burger. Can I take your order?” in Ed’s voice has never worn off, but the character had been brewing under the surface long before “All That”‘s first “Good Burger” sketch premiered.

Mitchell first created Ed during an audition for the show. He later put on the persona when he portrayed an unnamed pizza delivery boy in the sketch “Dream Remote,” which starred Josh Server as a kid whose remote control suddenly allowed him to fast-forward, rewind, and pause his reality. As soon as the Nickelodeon crew saw Mitchell bring Ed to life onscreen, the idea for “Good Burger” was born.

“I had a roller-blading coach who taught me to do a lot of the stunts.”

“I said, ‘Here’s your pizza’ [in the Ed voice], and from there they were just like, ‘Oh, this guy needs a whole world,’ and they created ‘Good Burger’ around this voice and this character that I created,” he says, adding that he’s proud of the lasting impact his character has had on the ’90s zeitgeist.

When it came to filming the movie, Mitchell says roller-blading in character was one of his favorite memories. “I had a roller-blading coach who taught me to do a lot of the stunts,” he says. “The only stunt that I didn’t do was the one where I flipped over the counter in the beginning because they didn’t want me to flip over and hit my head.”

In addition to doing his own stunts, Mitchell also loved sharing a scene with his mom, who walked past Thompson while he distracted the security guards during the Demented Hills Asylum dance scene. Mitchell says, “That was kind of an inside joke for the whole entire cast and crew.”

In 1996, Mitchell secured his second breakout role as Kel Kimble on “Kenan & Kel,” where he coined his iconic third-person catchphrase: “Who loves orange soda? Kel loves orange soda. Is it true? I do, I do, I do-oo.” “I love the fact that just the saying puts a smile on people’s faces,” says Mitchell, who recently partnered with Panda Express and Beyond Meat to promote the official launch of the plant-based Beyond Orange Chicken, which pairs well with his character’s favorite drink.

The show was also an opportunity for Mitchell to work more closely with Thompson and form the iconic comedy duo that ’90s kids have been quoting since we learned how to work a remote. After filming four seasons of “Kenan & Kel,” the pair parted ways. As Mitchell grew his family and further explored his comedy career, Thompson went on to become the longest-running “Saturday Night Live” cast member in the show’s 48-year history. On Sept. 12, the pair delivered a massive dose of nostalgia for fans when they reunited at the Emmys.

“We knew that fans were going to love this moment,” says Mitchell. “I’m so happy for Kenan. He killed it as host, as always.” Many fans were surprised to see the comedy duo together after decades of solo projects, but Mitchell says their friendship has held strong behind the scenes. “We stay in contact a lot,” he says. “I know, at the Emmys, people felt like we hadn’t seen each other in a while. No, no. We stay in contact all the time. We call each other. We have a group text and all this stuff.”

“Kenan and I had this surreal, amazing, humbling moment of our journey in this business.”

While “Good Burger 2” is still in its early stages, Mitchell says the film has already had a huge impact on him. “Kenan and I had this surreal, amazing, humbling moment of our journey in this business,” he says, recalling the moment he and Thompson stepped in the room to do their first “Good Burger 2” table read at Paramount. As soon as they walked in, they realized it was the same room where they’d read for the original film. The nostalgic moment instantly reawakened their comedic chemistry and made the table read feel just like old times.

“We were just really going, acting in front of everybody,” he says. “We haven’t missed a step. Kenan has not missed a step. It really feels amazing. The jokes are still there. Everyone was just cracking up. We were cracking up with each other, falling out of our chairs.” For Mitchell, the time he and Thompson spent apart has only made them better as actors. “[Acting with Kenan has] always been good, but now it’s gotten even better because we’ve been on our own, different shows. Us doing this adults now makes it even cooler.” 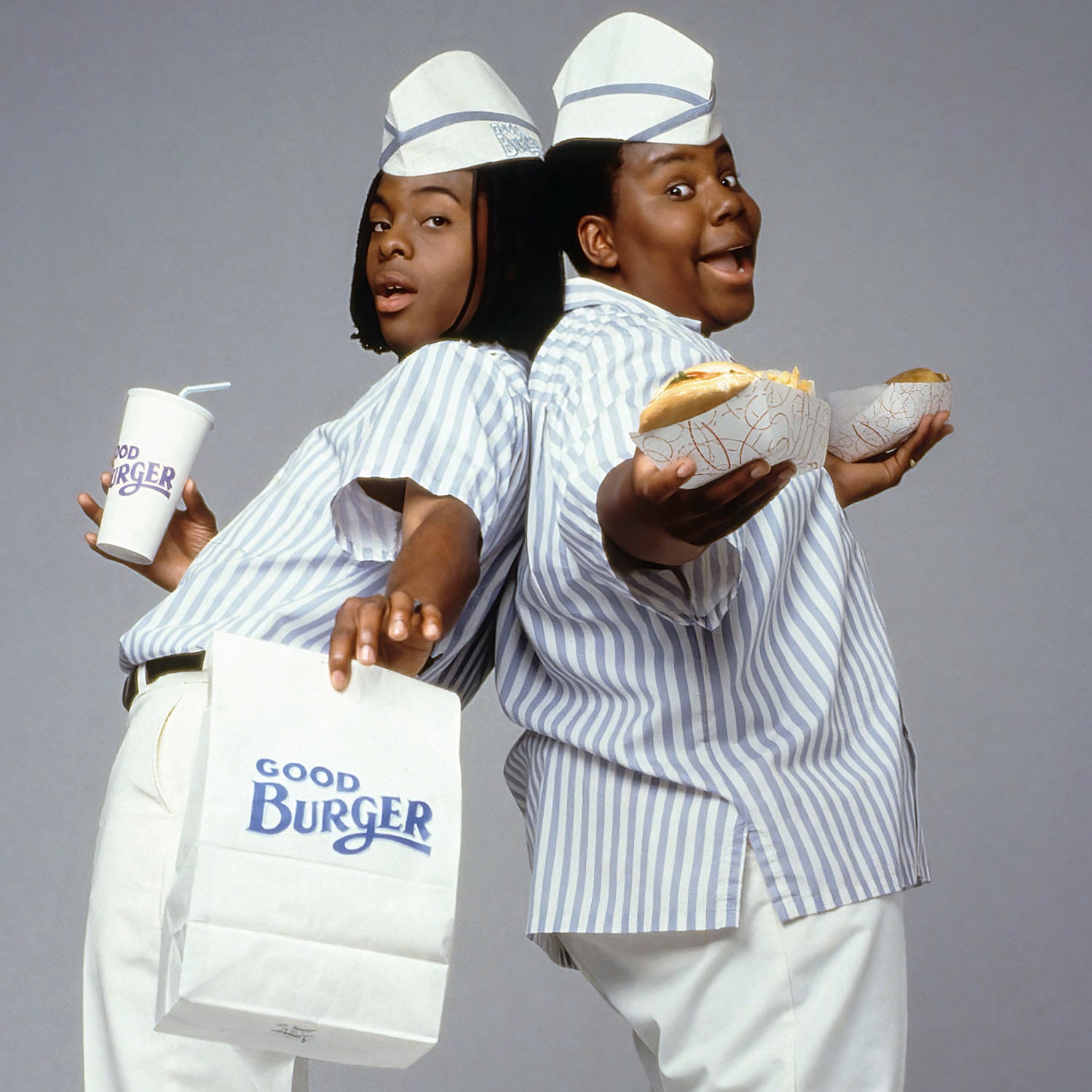 Over the last few years, the original “Good Burger” movie has become a regular part of the rotation during family movie night for Mitchell, his wife, and their four children, as well as a whole new generation of Nickelodeon fans. With so many people eager to see what’s happened to Ed and Dexter over the last two decades, Mitchell says that the cast and crew of “Good Burger 2” made it their priority to appeal to ’90s kids and newer audience members.

“Everyone’s going to be super excited and screaming when they see some of the characters that come back.”

“We know that a lot of fans have grown up on [the movie] and the fans who saw it in the ’90s are adults now and have kids and they’ve introduced it to their children,” he says. “So we wanted to make sure that we catered toward the new generation and also the generation that grew up on it. There’s going to be a lot of fun jokes for the adults and for the kids.”

Mitchell also hinted that the film will feature a few famous faces, including cameos from original “Good Burger” cast members and current Nickelodeon stars. “I can’t tell you who’s coming back but everyone’s going to be super excited and screaming when they see some of the characters that come back,” he says. Leaving fans with a taste of what’s to come, Mitchell adds, “Fans of the first one are going to love [‘Good Burger 2’] because the story is similar to the first one but it’s like 100-percent crazier and more fun.”